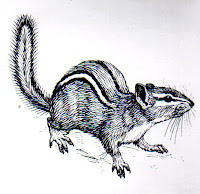 Why does it take a chipmunk to get a nest of bumblebees going? At our September 15 tea party in the High Park Pollinator Garden I had a chance to show Pollinator Gardens project members Joanne Jenkins and Judy Whalen why.

Actually, a mouse will do just as well as a chipmunk. Many species of bumblebees nest in old rodent tunnels. Typically the mouse or chipmunk mother has left behind nesting materials (grass, bits of fur) in a deep, protected part of the tunnel. Her babies were kept warm in these cozy nests. That's what bumblebee queens are looking for: a safe, protected spot where bumblebee babies (say that 3 times quickly!) can be kept warm - around 32 degrees Centigrade or or 88 F. 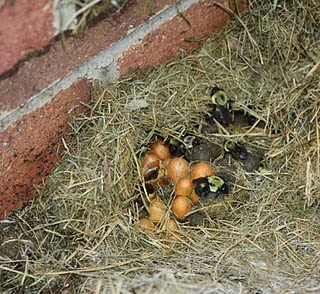 bumblebee nest in a compost pile
source: Jen Hatton's blog
Some species of bumblebees will nest in tufts of grass like the one shown above. The main thing seems to be good insulation. Some will nest aboveground in holes in wood or similar spots. Bumblebees can't cool their nests down as easily as honeybees. Honeybee colonies will have large numbers of bees fanning at the nest entrance on hot days; there just aren't as many bumblebees in a colony so being underground may be good protection against overheating.

You can make an artificial bumblebee nest early next spring. Just remember to get it out early enough - queens fly about when the first flowers come out, looking for a good site. Don't put it where it may get soggy, and avoid nearby ant nests. There are also designs for above-ground nests.

Why should we make artificial bumblebee nests? Many people tidy their yards up very thoroughly, rake garden beds, and generally remove sites where bees might nest. If this describes you, consider putting out a nest or three. 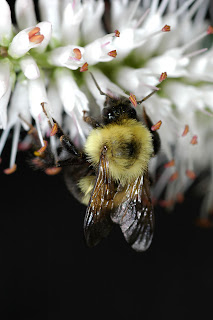 The bumblebee on the right came to early blooms in Amro Zayed's pollinator garden - thanks for the great picture, Amro! Like many bees, bumblebee populations have declined in the last few decades, and some species have gone extinct.

This ought to be a particular concern to all of us who love to grow and eat tomatoes, peppers, eggplants, blueberries, and cranberries. These and about 8% of the flowering plants in the world need "buzz pollination" to set seed and grow fruit properly. These plants hold their pollen tightly and only release it when a pollinator buzzes, and bumblebees buzz much more than honeybees. That's why bumblebees are used to pollinate greenhouse tomato crops. This was a considerable improvement on the "electric buzzers" previously used to pollinate greenhouse tomatoes.

Unfortunately, as often seems to happen, good intentions have led to problems. Bumblebees are now grown commercially and distributed to greenhouse growers. Unfortunately, commercial bees are often infected with various diseases, and can easily escape from greenhouses. York University researcher Sheila Colla has shown that wild bees near greenhouses are victims of "pathogen spillover". 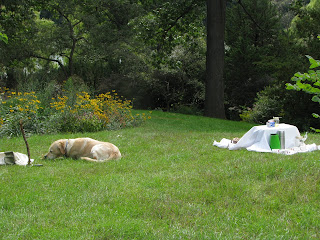 All of which helps explain why I was so pleased on September 15 to see bumblebees apparently appearing from nowhere in the High Park lawn just 2 meters (six feet) from our pollinator garden. I strolled over and saw many workers flying into a chipmunk burrow with the pollen baskets on their legs full of yellow grains of pollen and emerging pollen-less for another foraging trip. I might not have noticed them if I hadn't been there a bit early setting up the tea table. I sat down with my dog to enjoy the view. Just where the garden bed bends, I saw many bumblebees flying. 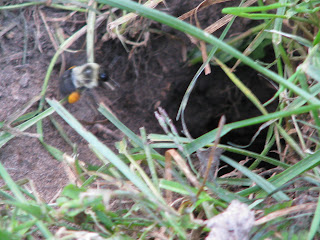 This is the ex-chipmunk hole I found, with a pollen-laden worker flying in. A week later I visited the same spot. There were still some workers collecting pollen, but many more very large bees - new queens and drones - coming and going.

The new queens will mate with drones from other colonies and then find themselves a safe place to spend the winter - not in their parental colony but often buried in soft earth or gravel. 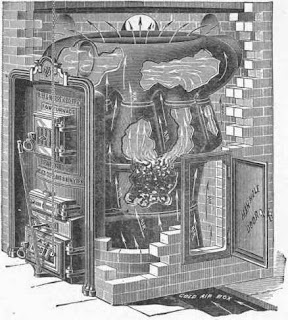 Our previous house was semidetached. One late fall day I was planting some daffodil bulbs next to our house. I had some left over so decided to give our neighbors a surprise spring gift. I started digging next to their house wall and to my amazement began to uncover one huge bumblebee after another! I found over a dozen before I stopped. The reason was simple: they used to have a coal furnace, and over perhaps 50 years had thrown the clinkers out their basement window (they were fine folks but definitely not neat-freaks!). Under the window the soil was almost all loose clinker, very free-draining and soft, and here it seems many of the next year's queen bumblebees had decided to spend the winter.

You too can create an overwintering spot for queens. Just find a spot, ideally under the eaves of your house or garage, dig a small pit, and fill it with the lightest, loosest gravel you can come by. No need to clean out a coal furnace for half a century - if you can find "lava rock" of the kind sold for barbecues, that will do very well. 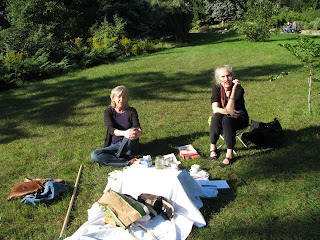 Since queens choose their new nest site in early spring, before we had planted the pollinator garden, this year's colony simply got lucky. There are lots of chipmunks in the park though so I hope next spring the new queens will house-hunt based on location - good holes in the grounds and a good supply of flowers nearby. 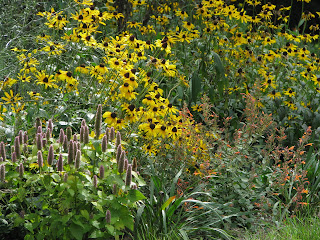 We had a fine time in the park on September 15, and a fine late flower display. The tea wasn't bad either, and the cookies were good (thanks, Joanne & Judy!). We'll repeat the tea party on October 6 - please drop in. There will be tea (bring your own cups) and flowers to plant for next spring. See you there!
Posted by Clement Kent at 10:11 PM No comments: 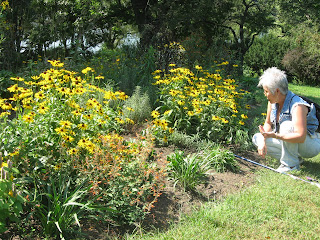 Please drop in and see the garden, meet some gardeners and pollinators.... 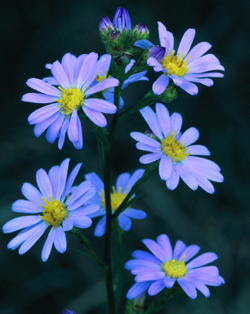 - High Park Pollinator Garden (Google map)
Just down the hill from the park headquarters and just above Grenadier Pond. South of the restaurant and north of Colborne Lodge.
- Ask any butterfly, bird or bee if you get lost.


What:
- see the garden and which plants did best
- meet other Pollinator Gardeners
- tea and goodies (volunteer help needed!)
- [maybe] meet some of the park staff
- Oct. 6:
- plant shade-tolerant & spring blooming natives 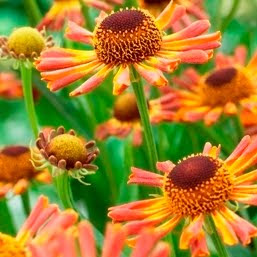 - free bloodroots to the 1st 3 volunteer planters
- if you have a camera, bring it and take pictures for the contest (contest? what contest? See the September Hort. Soc. Newsletter and a followup post to this blog for details)
- suggest changes/additions to the blog
- free bloodroots to the 1st 3 people posting comments
Posted by Clement Kent at 11:07 PM No comments: