...while the spring snow falls

A few weeks have passed since I last posted, so there is a leftover set of updates from Canada Blooms to be covered - but in haste because spring is here (in a very Canadian way, with snow showers and bloodroot blooms) so I'll also show you a few of the pollinator-related activities that are starting up along with the season.

Our garden at Canada Blooms was a great success. We gave up counting the visitors after the first morning, when we had close to 1,700. Afternoons and evenings were slightly less busy but it's a safe bet we had more than 10,000 visitors, perhaps as many as 15,000. The video at this link (shot by Arthur Levitin of Flash Video Production) gives you a sense of it.

As I mentioned in some previous posts getting native plants to bloom in mid-March was an experiment for me. Some cooperated, like the Marsh Marigold (Caltha palustris) in the pond.

I had bloom during the show in 1 out of the 3 pots of marsh marigolds. The first was so quick to show buds I waited a bit too late to put the other 2 in our warm greenhouse, so they had good leaves but no flowers.

Although the "marigold" show was a bit less than I'd hoped, it still pleased visitors, most of whom recognized it as one of our iconic spring flowers. Many fewer visitors recognized the beautiful red berries of our native swamp holly Winterberry (Ilex verticillata). The leaves on this plant were just beginning to come out; it doesn't hold them through the winter the way English hollies do.

When the show was over came the gruelling work of taking down the garden and hauling the plants home. I used some of the lumber from the show to build a temporary greenhouse on our back deck to hold the plants, since it had turned nasty and cold outside (during the show it was unseasonably warm).  For the last 3 weeks show plants have been shuttling in and out of the temporary greenhouse depending on the weather. A few days ago we looked out our kitchen window on a day when the plants were out and saw a Mockingbird eating the fruit of the Winterberry. This was a nice illustration of how these plants do double duty, providing flowers for pollinators in summer and berries to light up the winter for us and feed the birds in the spring.

Bog-bean (Menyanthes trifoliata) frustrated me by starting buds but not blooming until after the show. Darn! When it finally did bloom at home in the greenhouse and later in my backyard pond, it showed why I was sad not to have it in bloom at the show. 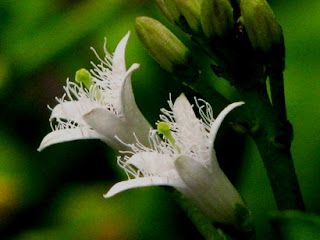 This is a holarctic species, meaning it is found in cool parts of the northern hemisphere on both  continents. It's not a bean at all, but when the leaves come out they look a bit like bean leaves. It likes a boggy spot with perhaps some acidity in the soil (people differ about this point) and normally bloom quite early, like the Marsh Marigolds. This is why I waited a bit too long to force it, guaranteeing that only you the blog visitors and I enjoy its amazing fringed flowers.


Oops! This blog has gone on too long and I'm late for a party at a pollinator researcher's house - the best kind of party - so I'll have to continue another time.
Posted by Clement Kent at 6:33 PM