Last year I was at Apimondia in Montréal, a big international convention of beekeepers, bee researchers, and suppliers of beekeeping and honey making equipment. One of the big events at Apimondia is the judging of honeys submitted from around the world. I walked by the exhibit area before the judging:

I was flabbergasted to see so many spots on the display shelves occupied not by jars of honey but by failure notices: 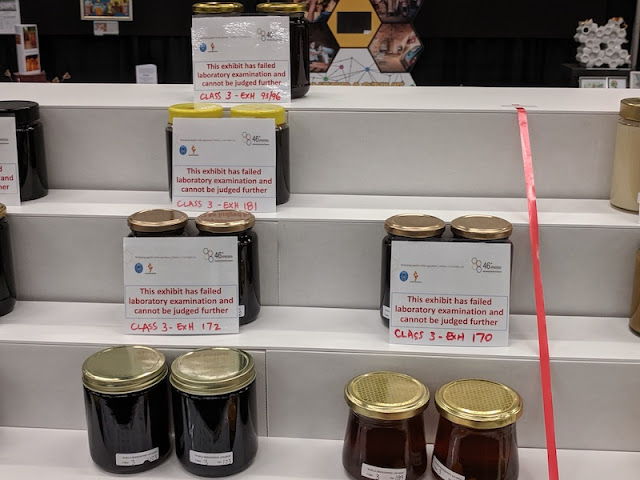 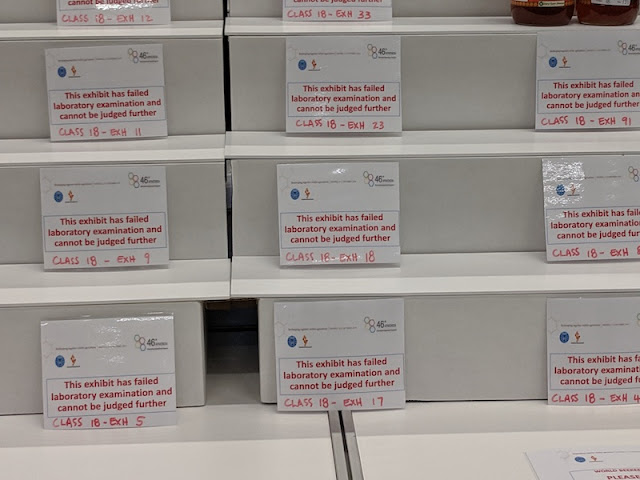 OK, what does "this exhibit has failed laboratory examination" mean? Well, it could be incompetence pure and simple - for instance, gathering honey from your hives before it has lost enough water will make it thin and more likely to spoil.

But in some cases it may mean that the honey was adulterated, diluted with corn syrup, full of banned chemicals like antibiotics or pesticides, etc. I was really shocked that so many honey producers would pay big bucks to ship their honey to Montréal, pay to enter it in the judging, and have it fail testing.

I was reminded of this on the solstice yesterday as I put the last of a jar of British Columbia blackberry blossom honey on a toasted slice of our homemade bread. This stuff I knew was the real deal, not the least because of the atomic "Bruker" symbol on the label.

The NMR machine is made by Bruker Scientific Instruments, and in spite of the alarming orbiting particles in the logo, it does not use any harmful radiation. In fact, one type of NMR machine is the MRI (magnetic resonance imaging) machines used in hospitals.

NMR uses something akin to a very low power microwave to stimulate molecules in the sample, which reveal themselves in peaks in the readout as the frequency is changed - just like turning the dial on an old-fashioned radio detects peaks at different frequencies - those are the radio stations.

Each kind of molecule has its own peaks, so the chemical composition of the sample can be found. Now, since a large proportion of "honey" in stores (up to 76% in the US , up to 20% of "pure" Australian honeys, and up to 50% of honeys imported from Asia) are in fact faked in various ways, North American beekeepers and honey packagers have been looking at cleverer and cleverer ways of detecting fakes.

This brings us back to the Awram family. Jerry Awram got his doctorate in the 1970s studying bumblebees. He went on to run a large family beekeeping business in Alberta.
At the time, honeybees on the prairie were killed off in the fall and beeks (short for beekeepers) started of from scratch each spring with bees imported from the U.S. or elsewhere.
Jerry moved the family business to Chilliwack BC where in the Fraser river valley, the bees can fly all through the mild winter. Some of these hives go back to Alberta in spring to harvest the canola blossom crop.

Peter Awram got his Ph.D. at the University of British Columbia in microbiology, where he still does research as a member of the BeeHIVE Research Cluster. But he and his father have pioneered the use of NMR in Canada for honey testing. I got my very nice blackberry honey sample from their booth at Apimondia, where they had posters explaining their method, and the results of some internet detective work they'd done on providers of fake honey ingredients in China.

Want to learn how to make fake honey? Just go to youtube, as their poster showed: 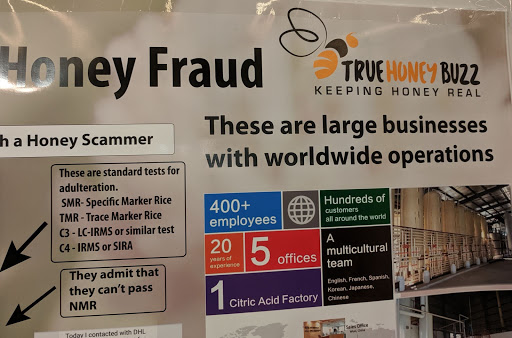 They point out that you can order fake honey ingredients from large producers in China on an ascending cost scale. The fakes that can pass chemical tests are more expensive than the corn syrup with rice flour added.

If you want to find out more about fake honey and the Awram's way of detecting it, you can try the CBC piece whose headliner writer had a little fun: A B.C. solution to taking the sting out of honey fraud