What does NAFTA have to do with pollinators?

In February we went to Montréal to talk about pollinator gardens at Concordia University. It was delightful to talk with students and staff in the greenhouses on top of the Hall building in downtown Montréal. Volunteers create a variety of urban farming projects as a project of Sustainable Concordia. It was amazing to look out and see snow on the Mountain while being too hot to keep the tuxedo coat on.

The audience looked very comfortable sitting in the afternoon sun among the plants! 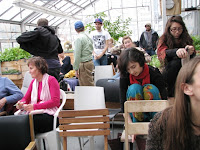 After the talk we had herbal tea from plants grown in the greenhouse and a sampling of wildflower honey from our York University bees.

Melanie McCavour, Lecturer at Loyola International College (Biodiversity) and GPE (Plant Ecology) invited us to Concordia. I first met Melanie at the 2011 North American Pollinator Protection Campaign (NAPPC) conference in Washington DC, where she spoke about NAPPC’s efforts to have pollinator biodiversity protected under NAFTA. Because I had missed part of Melanie’s Washington talk, we sat down with her in the greenhouse to find out more about her work in Washington, Mexico, and Montréal to protect pollinators.

Melanie studies forest ecology. In 2009 she was an intern in R&D at the National Capitol office of the USDA Forest Service where she had the opportunity to work on projects on global change, bioenergy and invasive species certification.  In the same year, Peter Kevan, head of the CANPOLIN pollination research group asked her to be a reporter at the 2009 Round-table on NAFTA, Food Security and Pollination at the Canadian Embassy in Washington D.C., which introduced her to efforts to use existing tri-lateral agreements under NAFTA between Canada, the U.S., and Mexico to improve pollinator protection, both native and non native bees (Apis mellifera) and other pollinators, such as bats and butterflies. NAPPC and others have recently released a policy statement on importation of non-native bees.  Since then she has been involved in efforts by NAPPC to work with the 3-nation NAFTA Commission for Environmental Cooperation (CEC) to deal with pollinator issues. A few years ago, the CEC produced a report on the monarch butterfly, a pollinator who  migrates between our 3 nations, and is an obvious organization to further awareness of the value of pollinators and the necessity of trilateral protection in North America.
The CEC was created in 1994 to address questions about the environmental impacts of the NAFTA treaty. Each nation is represented on the CEC differently: Canada is represented by the Minister of the Environment or his designee, while the USA is represented by the EPA. Melanie notes that the EPA has a far more regulatory role than the Canadian or Mexican Minister of Environment and in the U.S., some political groups view the EPA with great suspicion, so it can be very challenging to add new language to US laws or regulations to improve pollinator protection. Hence she and her collaborators on the NAPPC NAFTA committee have been searching for ways to clarify ( through external statements perhaps) existing treaty or regulatory language to make clear the importance of pollinators and their protection. For example, given that NAFTA is focused on trade, and agriculture is the single biggest beneficiary (in trade terms) of pollinator services, how can national or tri-national agreements on agriculture be clarified to protect the vital role of pollinators?
At the most recent CEC Council meeting, on June 22nd, 2011, Melanie wrote and presented orally a statement on behalf of CANPOLIN and NAPPC to the CEC Ministers. Ministers Juan Rafael Elvira Quesada, Lisa P. Jackson, and Peter Kent expressed enthusiasm for the statement and encouraged her to submit a proposal to the new NAPECA –a CEC funded community action grant. You can see Melanie’s presentation to the CEC and some of the news coverage it generated. Listen for her comment on essential products in which pollinators are involved, such as tequila and coffee. One of the themes of the CEC proposal I found interesting is to include pollinators and pollination within the “Payment for Ecosystem Services” (PES) document of the CEC.
Although Melanie did subsequently apply for a NAPECA grant for a review on pollinators and their value in N.A., it did not receive funding through NAPECA for the 2011-2012 year; it is hoped that this study might be funded by the Mexican Ministry or NAPECA next year.
Given some of these political challenges, one way forward has been for Canada and Mexico to cooperate to define and agree on positions and then bring them to CEC/NAFTA. This was the motivation for a Canada-Mexico meeting last year at the Cholula Ethnobotanical Gardens in Cholula Mexico.  I was delighted to receive as a thank you gift a bottle of honey for my laboratory’s collection from a local apicultural farm in Cholula and some locally produced tomato wine from Quebec. 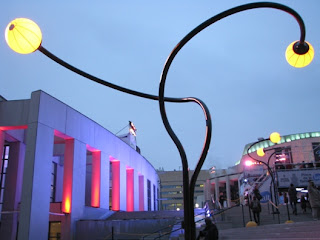 After meeting Melanie and her colleagues at Concordia, we were able to enjoy some of the happenings going on in Montréal, including the Montréal en Lumières festival and ice skating on the Mountain. We thank our friends at Concordia for inviting us to visit la belle ville! 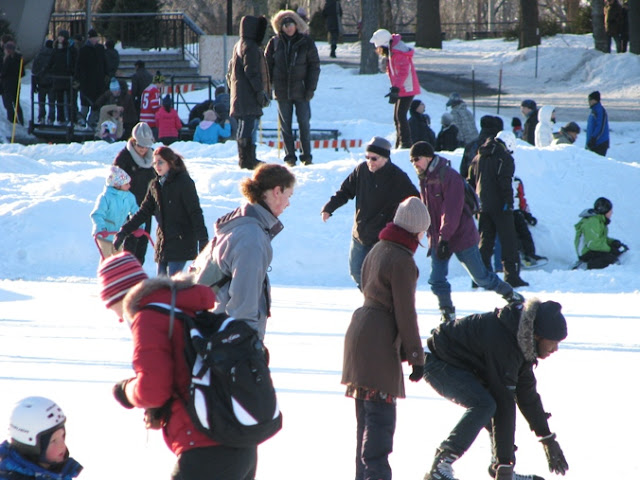