When I think about pollinators, beetles are not the first ones to come to mind, even though they contribute a useful B to BBBBB - Bees, Birds, Bats, Butterflies, and Beetles. But the lovely Carolina Allspice is pollinated by small, completely inconspicuous Sap Beetles.

Allspice (a.k.a. Sweetshrub or Spice Bush) is native to the U.S. east coast. Depending on who you read, it is native as far north as Virginia, or New York. The New York Flora Atlas says it is not native, but has been naturalized in Seneca County (in the Finger Lakes region) for over 50 years where it grows in the forest substory.

Allspice is a medium to large shrub which can grow from full sun to part shade. In Toronto it blooms in June. The deep purple flowers are fragrant, but quite closed up. It's thought that the fragrance imitates some of the smells of sap runs, to which the sap beetle is attracted. Beetles become trapped inside, dusted with pollen, and go on to pollinate another flower when they get out.

Allspice is part of a large group of species related to the magnolias, known as the magnoliids, which includes magnolias, nutmeg, bay laurel, cinnamon, avocado, black pepper, tulip tree and many others. Note how many of these we use as spices? Beetle-attracting fragrance is a feature of many magnolliids, which evolved about 145 million years ago. Bees didn't arrive on the scene until about 100 million years ago, so many magnoliids used beetles which had already been around for a long time. For example, beetles, thrips and flies are nutmeg pollinators.

Allspice's alternate name, spice bush, is shared with another native plant, Lindera benzoin. Both have aromatic bark and were used in indigenous medicine and cooking. Read more about Lindera in my blog about native swallowtail plants.  Lindera is in the same family as Allspice, so confusing the two is not uncommon. We've planted both kinds of spicebush in Kathy's Grove, our native plant pollinator garden in downtown Toronto. 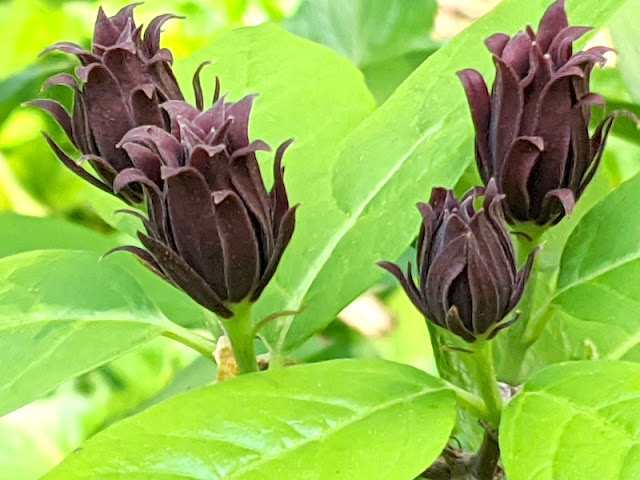