This is the first of several pages that will list native plants we are using to support native pollinators in Project Swallowtail. This page highlights species we're using to support native Swallowtail butterflies. Other pages will give more complete list of trees, shrubs, perennials, and grasses beneficial to different birds, bees, butterflies and other pollinators.

But first, let me direct you to a previous post on just this subject: Hops and Spice, Pipes and Paws - How Large a Tale will you Swallow? That post has fun with some of the history around these plants, animals, and human customs.

There are only two Ontario native plants Giant Swallowtail caterpillars will eat, and one of them, Prickly Ash, is a monster in the garden. Don't go there, unless you have a big property, and you want to be able to say, as Sean James does, "kiss my Prickly Ash" to annoying visitors.

Instead, we're planting Hoptree (Ptelea trifoliata). This shrub to short tree (up to 6m tall but can be pruned much shorter; 2-3 m along the shores of Lake Erie) thrives in the sandy soils found in our area, and is not too particular about light or moisture.

We'll be using plants grown from local seed, but if you are into foliage colors you can consider the variety "Aurea" which won a RHS Award of Garden Merit for its pale spring leaves.

I wrote about hoptrees and giants in this post which you can peek at for more details, including how to grow your own from seed.

Be sure to look online for images of Giant Swallowtail caterpillars so you can recognize them when a female has found your bush!

Here's another butterfly with only a single native host, the pipevine Aristolochia macrophylla. This Appalachian species is at the northern limit of its natural range with us, although it was in much demand a century ago as a way of shading porches. The pipevines are a large family in the tropics, and they all share compounds in their leaves which are very bitter if eaten. Like the monarch does with milkweed, Pipevine swallowtail caterpillars store up these bitter compounds so that the adults are very nasty tasting for birds.

Pipevine can be a vigorous grower where it is happy. A fence is an ideal spot for it, like the big spread of it on Ward's Island near the Island Cafe, which used to harbour many of these butterflies. Most soils are OK, but the vine doesn't like to be too dry. I've seen it growing well in half shade. 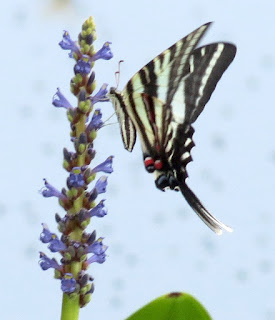 The only local host for the elegant Zebra swallowtail is the pawpaw tree, whose very tasty fruit is a fine
reward for pollinator gardeners in the fall.

It takes two different pawpaws to cross-pollinate and set fruit, and being a small tree they may take five years after planting to reach blooming size. But after just a few years zebra swallowtails can lay eggs on the leaves - they don't care about the fruit.

In nature, pawpaws are often found in moist soil near streams or rivers, and can tolerate partial shade. Once they reach blooming size, they send up new stalks from suckers. I trim mine off once a year, a 10 minute task.

My two pawpaws were grown from pawpaw fruit from the Niagara area, sold by a farmer in the Dufferin Grove Organic Market. I know of at least two other properties in our area with large, well-yielding pawpaws.

Compare the blue hind wings of the Spicebush and Pipevine swallowtails. They are part of what biologists call a mimicry complex. Lindera benzoin - Spicebush - is the favored host plant for Spicebush caterpillars, and also for the Promethea moth. The Tiger Swallowtail and the Imperial moth also feed on the leaves.

Spicebush has small but fragrant yellowish flowers in spring and red fruit in fall, although there are separate male and female plants, so you need one of each within a few back yards of each other to get fruit. Fruit, leaves, and stems are aromatic and have been used in teas and other recipes.

Spicebush blooms more in the sun but tolerates shade very well. My bush is planted north of an old pear tree where it gets several hours of afternoon sun.

These swallowtail caterpillars can also feed on Tuliptree leaves - see the Tiger Swallowtail, below.

As a child I didn't know that "Tigers" could be one of several very closely related species. The USA tiger's caterpillars feed on Tulip Trees and a fair number of other trees, the Canadian tiger replaces tuliptrees with poplars, and there is a hybrid species left over from the ice ages in the Appalachian mountains.

To add more to the confusion, the females can either be traditionally tiger-colored or have a black form which looks a great deal like the Black Swallowtail (below).

There are about 7 or 8 host plants for the Tigers, but the ones we are featuring in Project Swallowtail have benefits for other pollinators too. These are the Tulip Tree, Black Cherry, Sweet crabapple, Pussy Willow, and our friend the Hoptree (above).

Malus coronaria is native to our region and an excellent small garden tree, for pollinators in spring, caterpillars in summer, and birds in fall. Full sun produces the greatest bloom and fruit set. Jam is delicious!

Liriodendron tulipifera is a native giant magnolia - up to 50m/160ft in the south. An excellent shade tree, we planted it in Kathy's Garden to give shade and beauty to seven future generations, as the ash and beech and Austrian pine trees around it die over the next few years. It's valued for its wood.

Honeybees love tuliptrees in bloom, and make a flavour-rich dark honey from it. A friend gave me a jar of it from a grove in Ohio, which I save for special occasions.

Tuliptrees are native to Carolinian Canada, but used to be rare in Toronto. A friend now grows them as far north as Creemore. The City of Toronto has added them to the list of trees the city will plant for free in your front yard if you ask. Several in the Dufferin Grove neighbourhood have now reached 3 stories tall - this tree can grow several feet per year when young!

It hosts "only" 28 species of native moths, including the giant Tuliptree Silkmoth, and of course the tiger swallowtail. 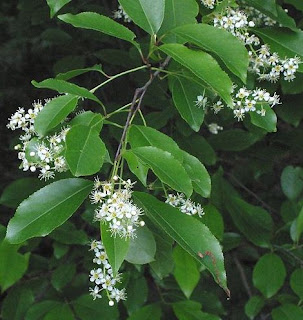 Prunus serotina is like sweet crabapple - flowers in spring, leaves in summer, and fruit in fall for birds. It's like tuliptree as it is a large tree with valuable lumber which can live hundreds of years.

I had a property on the shore of Lake Huron with one enormous Black Cherry and several of its children. The big tree had been struck lightning but survived. Just down the hill to the lake grew Alternate-leaved Dogwood, whose blue or purple berries ripened just after the cherries. We had torrents of birds for those weeks!


Talk about beauty: Coral Hairstreak, Eastern Tiger Swallowtail, Red-Spotted Purple, Spring Azure and Viceroy butterfly and Io, Cecropia, Promethea, and Emperor moth caterpillars feed on the leaves - it's one of the top trees in ecologist Douglas Tallamy's list of best trees for wildlife.

The native willow Salix discolor is a champion at supporting pollinators, and children! A few stems of "pussies" is one of the finest signs of spring. Keep them in water for a few weeks and you'll find roots on the lower stems. Plant them out in a sunny, moist spot and in just a few years you'll have pussies of your own to give away.

I watch my cut stems carefully. Pussy willows have male and female plants. If the soft white of the buds is replaced by golden pollen-bearing stamens, you have a branch from a male tree. The early spring pollen is incredibly valuable to early spring bees, including honeybees and bumblebees.

OK, enough about Tigers and their hosts. One more swallowtail to go:

The black swallowtail Papilio polyxenes is probably our most common swallowtail. Males and females are both black but differ in the amount of blue (mimicking the pipevine swallowtail).

Males defend mating territories fiercely, and if you visit a hilltop in High Park in summer you may see an aerial battle between two males.

Females search for plants from the carrot/Queen Anne's lace family to lay their eggs. Given the abundance of the invasive but well established Queen Anne's Lace (wild carrot), they don't have to look far.

If you want some native plants to feed black swallowtail caterpillars and provide blooms for other pollinators, I recommend three.

Golden Alexanders (Zizia aurea) has beautiful yellow clusters in May or June; it dies back if the soil gets dry. In addition to the black swallowtails, the solitary mining bee Andrena ziziae feeds its young only the pollen of Golden Alexanders. I have it in a spot with half a day's sun.

Great Angelica (Angelica atropurpurea) is a native perennial we should know better. Its sweet stems and roots were used for making candy, and Indigenous peoples have a number of medicinal uses for it. With golden blooms on purple stems three to six feet tall, it is a major plant in the water or rain garden. It needs moist soil and a reasonable amount of sun. Hordes of smaller pollinators will be attracted to the blooms.

And then, there are all the non-native but delicious herbs that will feed black swallowtail caterpillars. Anise, caraway, coriander, dill, fennel, lovage, and parsley are some of the more common ones. On the rooftop garden of 401 Richmond in downtown Toronto, gardener Saskia Vegter found caterpillars last year, showing that apartment dwellers can attract this butterfly.

Posted by Clement Kent at 5:00 PM No comments: